Please reply in this topic to share your thoughts about a Speck case you have used on your phone.

Helpful information to include:

I use the SPECK Presidio Grip for my Google Pixel 3 XL that I bought as “Renewed”/used on Amazon, after using the Republic page for showing how to determine what devices are compatible with their Network. I guess because that the Pixel 4 lineup was the new hot item, I was able to get the highly regarded SPECK case for a bargain price that I didn’t want to say “No” to.

My previous phone is the quite excellent Moto G5+ that I bought from the Republic store at a discounted price. It still works, but soon after dropping it in a parking lot, after having it for a few years, I noticed both the screen in front, and the aluminum panel in back, were now slightly bowed out from the frame. I’ve heard that sometimes the battery causes this, but dropping the phone like that inspired me to get a nice case for my new (to me) phone.

The SPECK feels like it really does have a rugged construction, and in the nearly six months of my using it, it’s held up perfectly. Lol, but I am still careful with my phone, and haven’t had much in the way of bad luck in dropping it, so this case thankfully hasn’t had to show what extremes it can handle.

Edit: I just checked, at it’s still being offered at an extreme discount. 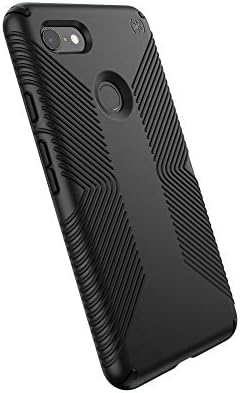 We both stared at the spot where my klutziness nudged the phone from the window sill three feet down to a dead cat bounce onto the tile floor. She was the first to say something.
“How much is that?”
“A couple of hundred plus shipping.”
So, with our new Moto G7 Play I wanted to dress the phone with some insurance - a proper case - one that could take a hit without looking like army issue for the field.

Our Moto now is stylin’ with the - take a breath for this - Speck Black Presidio Lite Case for Moto G7 Play designed for impact. Now we’re talkin’!

It is available in the Republic Wireless Shop for $25. How good or bad is it? First, reading the box is comforting. DESIGNED FOR IMPACT. It has been tested to take a four foot drop ( 1.2m ). Sorry, but this review will not confirm that test. (Update when/if that happens,)

The case is made of thermoplastic polyurethane which is a sort of rubbery plastic that feels good in the hand without feeling or looking like a grippy rubber appendage. It is a slim one layer piece, so your phone will not be bulked-up after fitment. I still miss the pocketable size phones, so I wanted nothing larger than the stark naked phone. The case’s surface has a ever-so-slight texture that is very much like the original back of phone.

The screen is protected from a face plant with tiny raised bezel all 'round the screen. It is not intrusive and looks original to the phone. The part I really appreciate is on the inside of the case. There are little projections all 'round the case’s interior where the case meets the sides of the Moto. They act as shock absorbing spacers between the phone and the case. The secret is out. These are so small you will never notice any size difference with the case on than with it off. Clever gents, those Chinese.

More protection from a drop comes at each corner where a very subtle nub acts as yet another four shock absorbers. The nubs would have to be pointed-out to be noticed.

None of these interior and exterior shock absorbing nubs adds any bulk or heft. The case fits like a glove and polishes the exterior design of the phone.

Fit and finish is laser accurate on the back openings for the camera lens and the Moto logo. The slot for the USB C and the microphone hole are dead center. Ditto for the earbuds/headset jack. All this makes the phone look as if it came all of a piece. No clunky aftermarket look.

I never have liked the rocking switch volume control on these phones. Instead, this case provides two buttons - one for up and the other…you’re ahead of me, aren’t you? It is a much more, for me, instant feel for where I am on the controls. And, it’s tactile instead of the finger grease slickness of the stock Moto volume control. This is a small thing but Ferrari sweats the small stuff, too.

Fitting it to the phone is easy and once it’s on there is no sloppiness at the side. It fits tightly.

Now, for the bad news: Ha-ha-ha-ha!!! Had you there.! Did you read this far to think I would find some fault with this case? Ha-ha-ha. Seriously, there is no downside that I can see after some really critical lookin’ and ponderin’.

Finally, the company - Speck - supports Crisis Text Line crisistextline.org which provides a phone number for people who desperately need another soul on the other end of their Moto when they’ve maxed-out to the point of doing something very regrettable not only to themselves but to their affected friends and family. I am happy to support corporations, companies that support the well being of the people in a society. Thanks, Speck.

I can say I look forward to no longer cringing while passing the phone to my wife who will forever take the handoff as if it is a Ming Dynasty porcelain tea cup. “I thought you had it!” “No, you dropped it!” That terrazzo in the Newark terminal is really hard. Ditto the tile in the kitchen, the floor at the Harris-Teeter, the cobblestone in Malaga, the shoreline sidewalk at Clearwater Beach, or my living room windows’ ledge. I dare not tempt fate but I do rest assured that my Moto G7 Play is a cosseted camper and that makes me a very happy camper.
Oh, and I look good, too.

Make that six edits. I forgot to mention the Lifetime Warranty.
Dean in Dunedin

Ha-ha-ha.
I am so forgetful and a stickler for (too much) detail. Edit #6 added the Lifetime Warranty.

If my phone were any cooler it’d be cryogenic.

Update: Regarding the drop onto the tile floor from three feet scenario, it done happened to me. My iron grip slipped and time slowed appreciably as I watched the phone hit the floor. About a three foot drop. It’s a new phone. The Speck Presidio case performed as per the company’s claim. It lives to fight another day. It would be a little cash well spent for this kind of protection.

I heard they’re coming out with virus protection, but maybe I’ve followed too many rumors lately.

Put Review Here: I received my Speck Presidio Grip Black and Blue case for my Moto G6 today, just like I was promised. Thank you. All my previous cases were OtterBoxes, however they do not have a case for the Moto G6. I was weary about using something besides OtterBox. However, an employee at Best Buy recommended this particular case, he uses the Speck case with his personal phone. As far as the features, I especially like the grips on the phone. So far I have not dropped it since I put the case on. I also like there is a lifetime warranty. This case is made for Motorola Products! I am hoping to get plenty of use from it.

Edit: I don’t think you can use a Popsocket on it because of the positioning of the grips in the back of the phone case.